How Writers Deal With Rejection 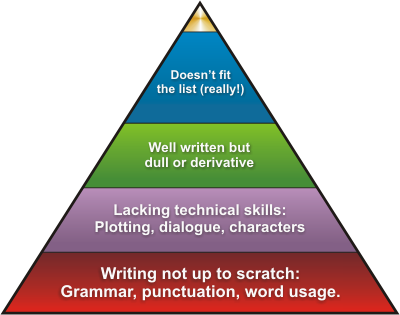 
How do writers deal with rejection?  Rejection letters do not all look alike.  Some publishers and editors send form letters with no specifics.  Writers get very little feedback from such letters.  Others send a more personal note rejecting the writer's manuscript.  Still others send a personalized rejection, with an explanation.  They are the most useful because writers can then judge where they have gone wrong.

I remember early on I received a rejection letter for my picture book I'm Just a Home Child with a suggestion from the editor to read books about how to write (obviously this letter falls into the red section of the pyramid).  More recently, I have received rejection letters saying that my chapter book I'm Just Daisy doesn't fit their agenda (the blue section of the pyramid).  Last night, I received a rejection e-mail which stated that my story does not engage the characters enough and the prose is flat.  Those comments would fit into both the purple and green sections of the pyramid.

I definitely appreciate the feedback.  I realize that a writer's prose can always be improved.  I'm more than willing to work on my writing.  But at the same time, how does a writer differentiate between sound advice and exaggerated criticism? It's like the painter who keeps adding to his painting.  Or the sketcher who keeps ripping up his sketches.  Or the sculptor who keeps reworking his sculpture.  At some point, a writer has to stop listening to the critics and have faith in his or her work.  Period.