It is estimated that 2 billion television viewers will watch the ball descend 141 feet in 60 seconds in Times Square on New Year's Eve. The Times Building, the second largest in Times Square circa 1904 courtesy www.dailymail.co.uk.

It is a tradition that started back in 1904, when Longacre Square, at the corner of Broadway and Seventh, was renamed Times Square after the pink granite newspaper building which sat at its centre.  From 1904 to 1906, fireworks were set off to commemorate the new year.  In 1907, the ball first appeared, initiated by New York Times owner Adolph Ochs.  It was composed of iron and wood, weighed 700 pounds and was lit up by 100 25-watt bulbs.  Six men with a rope and a stop watch slowly lowered the giant ball at midnight. During World War II, because of light restrictions, the ball was not dropped in 1942 and 1943.  A moment of silence was observed instead to honour the soldiers serving overseas. In keeping with the "I Luv New York" theme of the 1980's, the ball became red with a green stem in the 1980's.  In 1995, rhinestones and strobe lights were added to the ball.  To usher in the new millennium, a Waterford crystal ball was made, weighing over 1000 pounds. 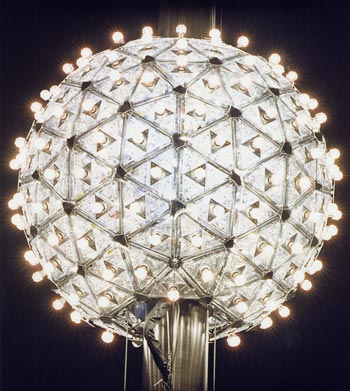 
As of 2009, the new 12000-pound 12-foot ball remains atop Times Square year round, waiting to be dropped on New Year's Eve.  One million spectators fill the Manhattan streets, eager with anticipation.  At the signal from a laser cooled clock in Colorado, the ball begins its descend one minute to midnight.  The crowd erupts in cheers.  "Auld Lang Syne" plays followed by Frank Sinatra's "New York, New York".