Every Who Down in Whoville

"Every Who Down in Whoville liked Christmas a lot.  But the Grinch, who lived just north of Whoville did not...He stood there on Christmas hating the Who's.  Staring down from his cave, with a sour grinchy frown at the warm lighted windows below in their town." (How the Grinch Stole Christmas, Dr. Seuss)

Rumor has it that Theodor Geisel was turned down not once but three times at the University of Virginia, a school founded by Thomas Jefferson.  Dr. Seuss vowed one day to look down on that university.

In 1937, Theodor Geisel struck gold when he signed a contract with Vangard Press for his first book And to Think that I Saw it on Mulberry Street (see post "From Mulberry St. to Madison Ave" at http://alinefromlinda.blogspot.ca/2012/04/april-29.html ).  He went on to fame and fortune with Horton Hatches the Egg, If I Ran the Circus and other picture books.

Before writing How the Grinch Stole Christmas, Theodor Geisel, now Dr. Seuss, bought a stately home in the mountains overlooking Virginia (just as Thomas Jefferson purchased Monticello).  Just as Dr. Seuss lived on a mountain overlooking Virginia, the Grinch lived on Mount Crumpit overlooking Whoville.  The University of Virginia mascot was called a Wahoo or a Hoo for short.  Some say that Dr. Seuss' inspiration for the Who's was the Hoo's.

Regardless of the book's inspiration, How the Grinch Stole Christmas, which first appeared on the shelves in 1957, became an instant hit.  It wasn't long before Americans were familiar with phrases like "a heart two sizes too small" and "little Cindy Lou Hoo" and "carve the roast beast" and "the last can of who hash".  According to some websites, How the Grinch Stole Christmas is the fifth most popular book Dr. Seuss ever wrote. 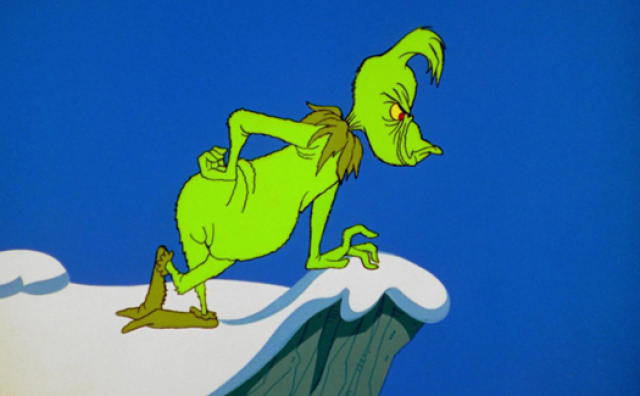 The Who stands on Mount Crumpit looking down on the Who's courtesy http://www.playbuzz.com/vanjaorman10/how-well-do-you-know-the-grinch-who-stole-christmas.