Peeling Back the Foil

What do you do with two hundred and sixty tons of turkey leftover from Thanksgiving?  That was the question that Gilbert and Clark Swanson asked themselves after they overestimated the number of turkeys that would sell over Thanksgiving 1953.  They rented a refrigerated car and stuffed it full of turkeys.  As the turkeys rode the rails, they challenged their employees to come up with a more economical solution to the problem.

Nebraska's Gerry Thomas, a Swanson salesman, made a trip to Pan-Am in Pittsburgh to study their frozen dinners served on their airplanes.  He "borrowed" one of their aluminum trays, then set to work redesigning it into three, rather than one, compartments.  While the frozen dinner idea had been around for about a decade, no one had married the frozen dinner to TV; that is, until Mr. Thomas.  By 1953, most middle-class American households no longer had a maid.  But they did have a TV set -- 33 million of them.  Why not market the dinners as TV dinners?  Gerry even designed the box like a TV set complete with a volume knob. 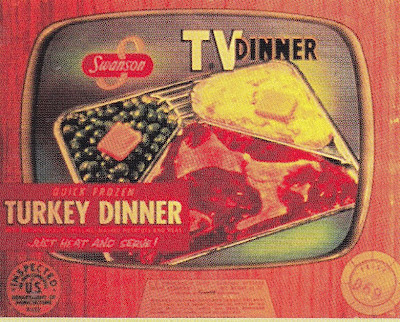 Swanson assembled two dozen women in the Fall of 1953.  Armed with spatulas and ice cream scoops, the women assembled 5000 dinners complete with turkey slices, sweet potatoes, peas and cornbread dressing.  Each TV dinner was priced at 98 cents.  Directions on the box recommended that the dinner be reheated for only 25 minutes.

One Swanson ad showed a woman arriving home at dinner time and saying to her husband;  "I'm late, but dinner won't be."  While Gerry Thomas received hate mail from some men, complaining that they wanted their wives to cook from scratch as their mothers had, the majority of Americans seemed to warm up to the idea of a TV dinner.  In the first year alone, Swanson sold 10 million.

By 1960, Swanson added a fourth compartment:  dessert.  Two years later, they officially dropped the name TV dinner.  However, the notion stuck.  With the advent of microwaves, the foil tray was replaced by a plastic one.  At over 60 years old,, the TV dinner is still going strong. 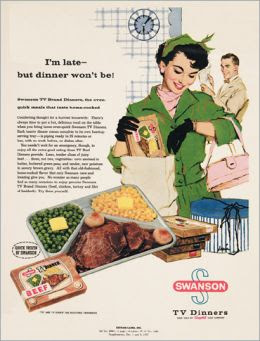