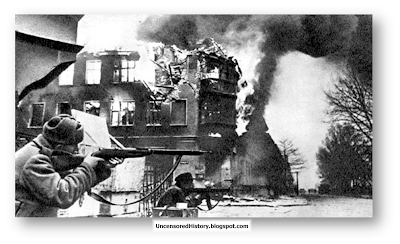 Fighting in Koenigsberg circa 1945 courtesy
http://uncensoredhistory.blogspot.ca/2012/08/east-prussia-koenigsberg-1945-hell.html.


While Koenigsberg had survived the vicious fire bombing of August 1944, the assault on East Prussia was not over yet.  From January to April of 1945, East Prussia fought the Russians.  It came down to a vicious street battle from April 6 to 9.  Here are the final days of that beautiful city.

As 1945 dawned in East Prussia, there were still many who believed Goebbels' propaganda machine that there was nothing to fear.  However, on January 24, 1945, the Red Army severed all railroad and roadways to the West, essentially trapping the East Prussians.  The Germans could no longer pretend.  During a frigid winter, hundreds of thousands of refugees headed north to the Baltic Sea, part of The Big Trek, hoping for a marine escape.

At the end of January 1945, Koenigsberg was packed with 300,000 East Prussian refugees who had fled to the city hoping that it would be the first stop on their flight to freedom.  Unable to get any further, they parked their prams, sledges and carts along the roadsides, crowded into the bombed and damaged buildings and released the horses which had drawn their carts since they left their villages.  Many of these animals died of starvation and others were shot.  Werner Terpitz recalls how the once beautiful streets were strewn with the carcasses of dead horses from which all edible meat had been taken (http://uncensoredhistory.blogspot.ca/2012/08/east-prussia-koenigsberg-1945-hell.html),

For ten weeks, the Red Army encircled Koenigsberg.  Russian loudspeakers blared propaganda.  The city was under constant fire, the Soviet aircraft now unchallenged by the Luftwaffe.  Families were forced to take refuge underground.  Men as old as 60 and boys as young as 12 were drafted into the Volksstrum to help defend the city. 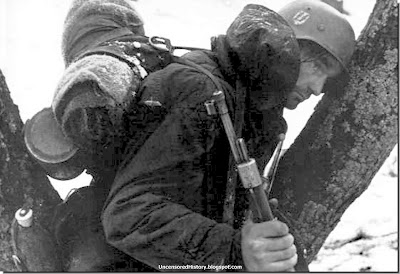 
On February 10, the siege was broken when the German Army retook the Samland Peninsula as well as the Koenigsberg suburb of Metgethen.  ONe hundred thousand citizens took the opportunikty to flee the city via Metgethen.  A temporary refugee camp was set up on the Koenigsberg canal where sickness and disease ran rampant.  Some refugees even returned to the city hoping to find food and shelter.  The frigid temperatures dropped and things started to retune to normal in Koenigsberg where restaurants and cinemas reopened.  THe young people felt a sense of renewed hope while the elderly were pessimistic, fearing banishment to the Gulag when the Russians returned.  "Many took refuge in alcohol..as they tried to ignore the deterioration of the city, the rubble, the rubbish, the dead horses, the abandoned trams."

The inevitable came in early April with the drone of the Russian aircraft over the city.  Koenigsbergers heard radio broadcasts for the last tine on April 4 when the electricity went out.  On April 5, over 100 Russian planes flew over the city undisturbed; Koenigsberg was indefensible.  The barrage on the capital city was unparalleled; veteran officers had never seen anything like it. The streets crawled with Russian soldiers.  Stalin organs, rocket launchers mounted on the backs of trucks, fired off rapid barrages.  The young kids of the Volksstrum streamed "Help!" and "Mum!" as they hid in the trenches.  Under clouds of smoke, buildings blew apart and automobiles were riddled with bullets.

When the smoke cleared in Koenisberg, the landscape looked lunar. Gone with the great avenues and magnificent buildings.Ninety percent of the city sat in ruins.  Koenigsberg surrendered on April 9. 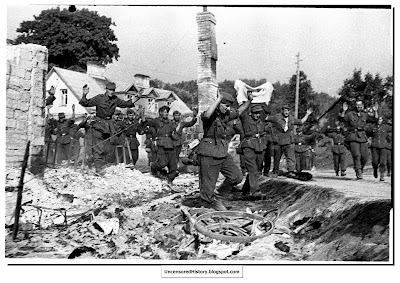