Death on the Baltic

“A former glorious symbol of a crumbling empire.”

The Wilhelm Gustloff in the Mediterranean circa 1938 courtesy www.feldgrau.com.

Decorated with Nazi flags blowing in the breeze, the Wilhelm Gustloff was christened by its namesake’s widow in 1937.  Built by Blohm & Voss in , at a cost of 25 million Reichsmarks, the magnificent ship was the length of two football fields and the height of 184 feet.  It weighed 25,000 plus tonnes.  It was built with eight decks and three anchors.  It boasted 50 bathrooms and 145 toilets.  Built with four engines, it travelled at a leisurely rate of 15.5 knots (18 miles per hour).

Named after assassinated Swiss Nazi leader, Wilhelm Gustloff, the cruise ship was used for the Strength Through Joy movement in .  The ship provided an opportunity for middle and lower class Germans, who normally couldn’t afford a trip, to go on a cruise to exotic destinations.  It was later renovated to be a hospital ship, but sat in port for four years.

Map of Operation Hannibal, the evacuation of Germans from East Prussia in 1945 courtesy www.lewistonschools.net.

When Admiral Karl Donitz planned Operation Hannibal to transport hundreds of thousands of refugees to the west, the biggest ship he was given was the Wilhelm Gustloff.  It docked at Gotenhafen, on the , on .   Originally, tickets for the voyage were printed on the ship’s printing press, with preference given to wounded soldiers and Nazi party members.  Several members of the Women’s Auxiliary were also on board.  Twenty year old Anni Faust had a haunting premonition that the ship would sink, but she forced herself to get on.  Even though the Wilhelm Gustloff only had the capacity for 1500 passengers, when the original tickets ran out, the crew started letting more civilians on board.  Gotenhafen’s dock was milling with refugees, exhausted from the Big Trek across the frozen Frisches Haff, laden with their possessions.  Among the crowd were the elderly, and women pushing baby carriages  Afterwards, the Gustloff accepted latecomers without tickets, packing it from stem to stern.  It was the civilians who made up the overwhelming bulk of the passengers. 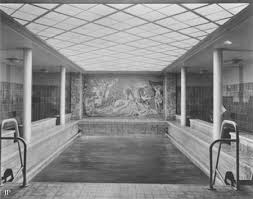 It had been the coldest winter in twenty years and the decks were frozen when the passengers boarded.  The corridors were so crowded that passengers couldn’t even reach the toilets.  The pool had been drained and was full of billets, mainly female military members.  The twenty two lifeboats that hung on the side of the ship, covered with ice, were only sufficient for half the passengers.  After a week’s wait at Gotenhafen, the ship was anxious to sail.  The Wilhelm Gustloff could wait no longer for escorts and therefore left port with only two smaller vessels, one of which had to abort its trip.

The four captains on board had to make a choice:  hug the Baltic’s shore and take the risk of detonating one of the 668 mines, or take a course further out to sea, but risk encountering a submarine.  The captains chose the latter.  Ignoring wartime practice, because of the driving snow and limited visibility, they chose to keep the ship’s running lights on.  They also chose to sail without Red Cross markings.  As author The Cruelest Night Christopher Dobson summed it up:

“[The Wilhelm Gustloff] had a miserable cargo, quarrelling officers, speed reduced due to engine problems, navigation lights on, escorted by one small vessel”. (The Cruelest Night)

She was an accident waiting to happen.  Nine hours into her voyage, an explosion ripped through the crews’ quarters; a second explosion destroyed the swimming pool; and a third explosion ripped through the engine room, crippling the ship.  “Out!  Out!  We’ve hit a mine!” screamed Eva Boden, one of the passengers.  But by the third explosion she realized that they’d been hit by torpedoes.  The order of “women and children first” was ignored in the resulting panic.  The dozens of pregnant women were left in the dust as passengers scrambled to climb to the upper decks.  People elbowed each other to get to the top, many being trampled in the process.  Mobs fought to get in lifeboats.  At least one crew member fired a pistol to restore order.  Others used pistols to end it all.

As the lifeboats were launched it became apparent that there were only enough for half of the passengers.  People jumped into the sea, grabbed a lifeboat, and hung on like “bunches of grapes”.  Rosemarie Petrus said that she still remembers the “indescribable cry” she heard as passengers drown one by one.  Images of clothes, valises and Teddy bears filled the sea.  The wounded soldiers on board did not have a chance; nor did the babies and young children.  As the Wilhelm Gustloff prepared to take its last breath, its lights came back on in a final blaze of glory, and then it disappeared below the icy sea.  And yet all four captains found places in lifeboats and survived the sinking unscathed.  On , after only 50 minutes, the Wilhelm Gustloff sank, taking 9,614 of the 10,614 passengers with it.  Ironically, it was the late Wilhelm Gustloff’s birthday.

Seven hours later, a rescue boat plied the icy waters of the Baltic searching for anymore survivors.  It came upon a lifeboat, full of passengers huddled together, all of whom were now dead.  The rescuer still checked the boat just in case and found a baby, blue from the cold, wrapped in a blanket under the corpses.  Petty Officer Werner Fick took the baby boy into his cabin and revived him.  The baby’s parents went down with the ship and therefore Officer Fick adopted him.  He was the last survivor of the Wilhelm Gustloff, once the pride of the cruise line, now a mass of twisted metal at the bottom of the Baltic.

P.S.  Rob's Oma, Elfriede Neumann, set out by horse and buggy to get on the Wilhelm Gustloff with her two small children. However, one of her horses got spooked by nearby gunfire en route to the Baltic Sea and she was forced to turn back.  How fortunate for Oma who didn't even know how to swim!

Note:  To read my poem about this tragedy visit "The Wilhelm Gustloff Villanelle" at http://alinefromlinda.blogspot.ca/2012/01/wilhelm-gustloff-villanelle.html.
Posted by Unknown at 10:38