Growing up in a family of British background, I knew very little about German history, other than what I had seen in movies and on television.  The German was usually the villain.  I knew that Nazi Germany had been the aggressor during the Second World War and I knew that the Allies had defeated Germany.  I knew that Nazi Germany had committed many atrocities during the war, above all, the Holocaust.  Many people suffered under the Nazis and were angry, justifiably so.  Many were bent on revenge.

It wasn't until I married a German-Canadian and started delving into his family history that I started to learn about those Germans who were caught in the crossfire.  While many Germans loved Hitler, not all of them did.  While some volunteered for service in the army, others did not go willingly. While some joined the Nazi Party, others spoke out against Hitler.

But when war came to East Prussia in 1939, their dream escaped them.  Otto was drafted into the German Army.  Elfriede became a fulltime farmer as she worked the land with baby in a basket by her side.  What every soldier's wife dreads became reality in 1944 when Elfriede's husband didn't come home, declared MIA.  Elfriede became both mother and father to her two young children.

While the Allies saw the end in sight by the beginning of 1945, the year marked just the beginning of Elfriede's troubles.  The Red Army, bent on revenge after the German atrocities committed in Russia, ran roughshod over East Prussia.  Elfriede attempted to flee on a ship called the Wilhelm Gustloff on a frigid January night, but her horse, spooked by nearby gunfire, refused to go any further.  Even so, the ship sunk on the Baltic, nine-tenths of its passengers drowning in the sea's icy depths. Back on her farm, Elfriede was confronted by the Red Army.  They seized everything:  her land, her house, her belongings, her source of food, even her wedding band.

The next two years saw Elfriede, holding her two children by the hand, wandering through East Prussia, desperately searching for food, shelter and work.  After six months on the road, they settled in a work camp.  Elfriede was only spared death because she was such a hard worker, something the Russians rewarded her for with an extra shovelful of flour.

While in the work camp, Elfriede survived both malaria and typhus, the latter running rampant through Eastern Europe after the war.  Her parents were not as fortunate, succumbing to starvation, followed by her sister.  Elfriede buried all three with her own hands.  Fearing that her children might starve to death too, Elfriede gave her son to her in-laws temporarily to scavenge for food in Lithuania.  Elfriede would remain in East Prussia with her daughter searching for sustenance.  It would be a full year before she would see her son again due to an unexpected journey.

A document called the Potsdam Agreement would have a direct bearing on Elfriede.  In an early example of ethnic cleansing, two million Germans were purged from East Prussia.  Despite the recommendation to authorities to use "humane treatment", the refugees were ordered into cattle cars at gunpoint and transported across the Polish Corridor to the rest of Germany. The weeklong trip saw many expellees, already malnourished and diseased, starve to death.  Their bodies were stacked in piles at the side of the railroad tracks.  Only Elfriede's quick thinking saved the occupants of her car:  she brought along a pot which everyone used to go to the washroom, then dumped the waste out the window.  She arrived in Ruhla, East Germany, aching for her son, homesick for her homeland.  She would never return, however.  East Prussia now belonged to Russia and Poland.

Note:  For more information, read the excellent Spiegel magazine article
A Time of Retribution:  Paying with Life and Limb for the Crimes of Nazi Germany http://www.spiegel.de/international/germany/a-time-of-retribution-paying-with-life-and-limb-for-the-crimes-of-nazi-germany-a-759737-5.html. 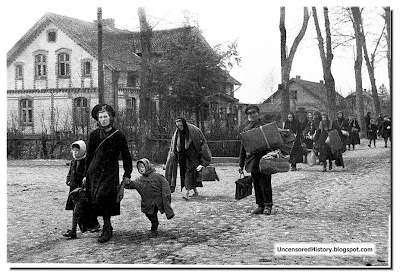