"Now you be a good boy and eat your vegetables like I had too [sic]!" (John W. James III)

After a year of dealing with issues like Watergate, a break in, Deep Throat and a cover up, the letter that President Nixon received on July 12, 1973 was a breath of fresh air.  Nixon had just been released from the hospital after suffering from pneumonia.  An eight year old boy offered his advice to the ailing president.

"I heard you were sick with pneumonia.  I just got out of the hospital yesterday with pneumonia and I hope you did not catch it from me.  Now you be a good boy and eat your vegetables like I had too [sic]!  If you take your medicine and your shots, you'll be out in 8 days like I was!"
http://www.dailymail.co.uk/news/article-2531205/Letters-Of-Note-Some-greatest-missives-read.html

President Nixon was so touched by the letter that he read it aloud to his White House staff.  The following summer, Nixon was forced to admit he had a role in the cover up of the Watergate break in and resigned.  The letter now sits in the Richard Nixon Library. 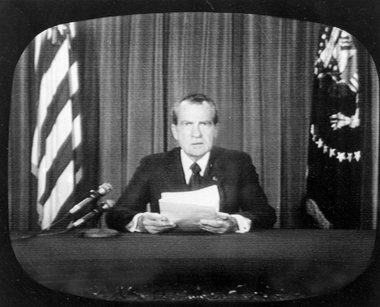