"I am greatly interested in the Deerfield situation, because the problems of integration -- in schools, in churches and in job opportunities -- will not be resolved until all people can live anywhere in this wonderful land of ours." (Eleanor Roosevelt) 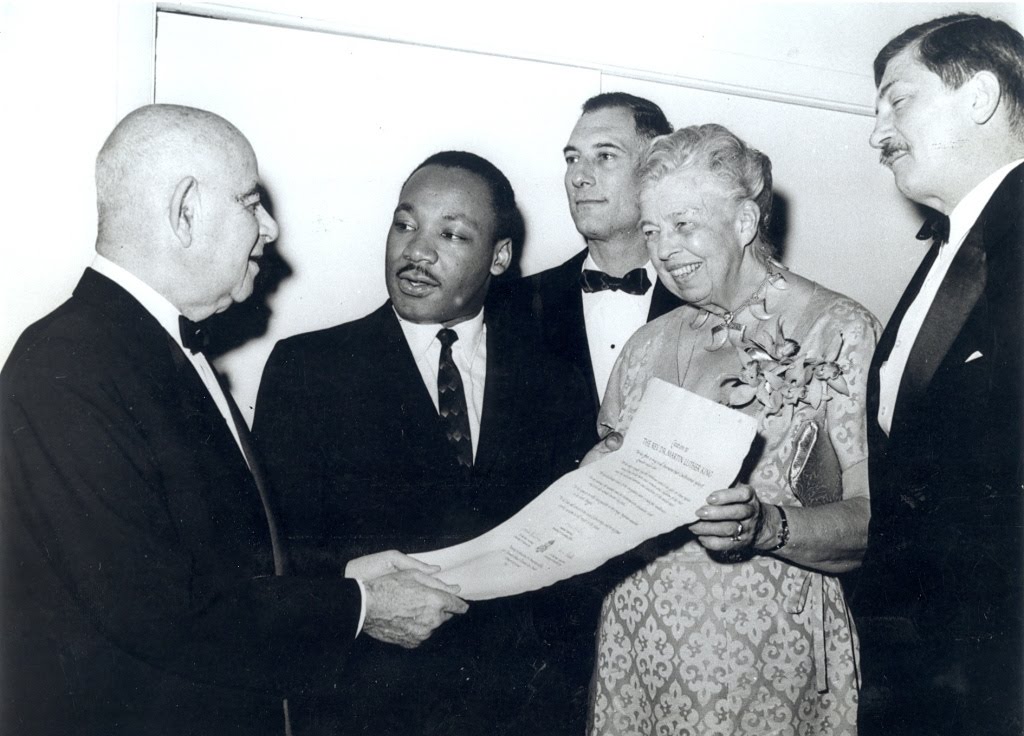 Eleanor Roosevelt presents Martin Luther King Jr. with an award from the Americans for Democratic Action circa 1961 courtesy http://www.boweryboyshistory.com/2011/02/troubled-times-dr-king-and-abe-lincoln.html.

In March of 1962, Eleanor Roosevelt, the wife of former President Franklin D. Roosevelt, reached out to Civil Rights leader Martin Luther King Jr.  She invited him to discuss an integrated housing project at Deerfield, Illinois.  The letter was unusual in two ways:  in the past, First Ladies had not gotten involved in politics; second she was a white woman socializing with a black man, a practice still questioned in the 1960's.

Developper Morris Milgram had successfully planned an integrated community in Concord Park, Pennsylvania.  He hoped to do the same in Deerfield, Illinois.  His plan included 51 housing units, 12 of which would be reserved for blacks.  However, when the community found out, they fought to stall the development.  The builder launched an appeal with the Illinois Supreme Court.

Eleanor Roosevelt penned a letter to Martin Luther King Jr. inviting him to tea to discuss the issue. The former first lady pointed out:  "I am greatly interested in the Deerfield situation, because the problems of integration -- in schools, in churches and in job opportunities -- will not be resolved until all people can live anywhere in this wonderful land of ours."(http://www.thekingcenter.org/archive/document/letter-eleanor-roosevelt-mlk)

In a time when blacks were usually found in the kitchen, not the Oval Office, of the White House, these words from a former First Lady were considered revolutionary.  In fact, Mrs. Roosevelt had been a vocal opponent of segregation from the time her husband first became president.  She was not afraid to take a stand.  At a public meeting in 1938, she defied Jim crow laws by moving her chair out of the whites only section of the audience to the aisle which separated the blacks from the whites.  Mrs. Roosevelt resigned from the daughters of the American Revolution after they refused to let black singer Marian Anderson perform at Washington's Constitution Hall.


For her stance against segregation, the KKK threatened to have her kidnapped.  FBI head J. Edgar Hoover, had her followed.  Mrs. Roosevelt carried a pistol around with her for protection.

While Eleanor Roosevelt stood up for the proposed integrated neighbourhood in Deerfield, Illinois, the Supreme Court refused to side with the builder and the development was never completed.  The former First Lady might not have won the battle, but she did win the war.  In 1963, President Kennedy initiated Civil Rights legislation which President Johnson signed in 1964.

Martin Luther King Jr. wrote in a 1960 letter to Mrs. Roosevelt:  "Once again, for all you have done, and I'm sure will continue to do to help extend the fruits of Democracy to our southern brothers, please accept my deep and lasting gratitude."  Eleanor Roosevelt passed away on November 7, 1962.