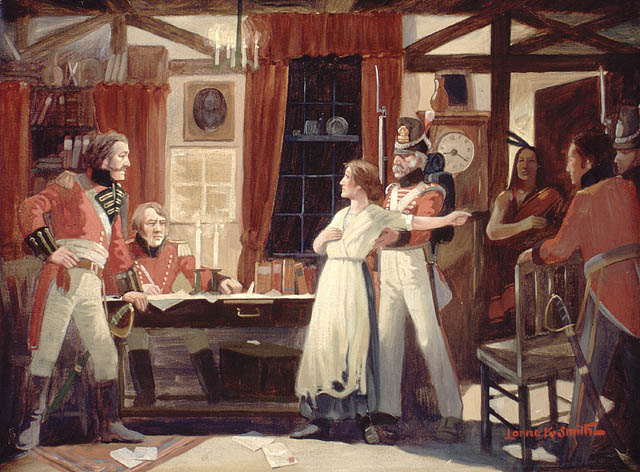 She is the Canadian Paul Revere.  Just as Revere made the ride from Boston to Lexington to warn the Americans that the British were coming in 1775, Laura Secord made an historic trek from Queenston to Beaver Dams to warn the British that the Americans were coming in 1813.  Yet almost 50 years would pass before she was officially recognized for her heroism, thanks in part to a letter from Lieutenant James Fitzgibbon.

Laura Secord, nee Ingersoll, was born in the Massachusetts Bay Colony the year that Paul Revere made his famous ride.  Her parents were United Empire Loyalists who moved to Upper Canada after the Revolutionary War.  Laura married and had six daughters and one son.  Her husband, James, was wounded in the Battle of Queenston Heights during the War of 1812, the same battle in which General Isaac Brock was killed.

In June of 1813, James was still recuperating from his war wound when a group of American soldiers was billeted at the Secord house.  Laura overheard the soldiers discussing their plans to surprise the British at Beaver Dams.  Knowing her husband was still incapacitated, Laura planned her next move.

At the age of 38, considered old at the time, she set on on foot to St. David's.  There, she met up with her cousin, Elizabeth, who joined her on the trek.  The two women battled fatigue, heat, snakes and swamp-like conditions as they made their way along Twelve Mile Creek.  At Shipman's Creek, present day St. Catharines, Elizabeth could go no further.  Laura continued on her own, crossing over the river on a fallen log and climbing the rocks of the Niagara Escarpment.


Finally, she came to a Native encampment.  Not knowing whether they were friendly or not, she approached them hesitantly.  The Natives, who happened to be Mohawks from the nearby Grand River settlement, led her to the British encampment.  It had been 18 hours since Laura left Queenston.  She had travelled twenty miles (normally a twelve-mile journey) preferring to take a more circuitous route to avoid American entanglements.

At Decew House, she met Lieutenant Fitzgibbon and alerted him to the American plan to attack the British at nearby Beaver Dams.  Fitzgibbon compiled 50 men, 15 militia and 85 Mohawk warriors.  The Americans gathered 542 soldiers.  It should have been a slaughter.  However, Fitzgibbon ordered his men to march back and forth to give the enemy the illusion that they had more men.  The Mohawks let out bloodcurdling war whoops.  The Americans bought it, surrendered, and were captured by the British, all within three hours.  Beaver Dams was a key battle enabling the British to regain a foothold in the much needed Niagara Peninsula.

Laura Secord, a housewife turned heroine, almost became a footnote in history.  For decades, no one knew who she was.  After her husband passed away, she became a poor war widow.  She came close to getting a job as a tour guide at the Brock Monument which was erected in 1824.  However, at the last minute the job was given to someone else in a political move.

In 1820, Lieutenant Fitzgibbon wrote a letter vouching for the heroism of Laura Secord. He explained that Laura had alerted him to an "intended attack to be made by the enemy" and that she had "arrived at [his] station at sunset, on an exceptionally warm day after having walked twelve miles".  Fitzgibbon's letter planted the seed in the minds of Canadians.

But it was not until 1860, nearly five decades after her historic trek, that the seed germinated and Laura Secord was officially recognized for her heroism.  The Prince of Wales, visiting from Britain, thanked the war widow for her role in the War of 1812 and awarded her 100 pounds.

In 1913, the Laura Secord Chocolate Company opened, commemorating Secord on the centennial of her famous walk.

Today, you can visit Laura Secord's house at Queenston Heights, not far from Niagara Falls.  While it once housed American soldiers, it now hosts visitors from both sides of the border, a border that might not be there if not for this housewife turned heroine.