Here are ten facts you may not know about World War II.

1.  World War II was the bloodiest conflict ever.  It cost more money, damaged more property and killed more people than any other war in history.

2.  For every five German soldiers killed, four died on the Eastern Front.

3.  It is estimated that 1.5 million children died in the Holocaust.  Approximately 1.2 million were Jews and tens of thousands were Gypsies.

5.  Over 2 million German women were raped by the Red Army.

6.  Max Heiliger was the fictitious name the Nazis used to establish a bank account in which they deposited Jewish money, jewelry and gold.

7.  The word Nazi derives from a Bavarian word meaning "simple minded".  The word, originally used as a term of derision, was coined by journalist Konrad Heiden.

8.  The swastika derives from a Sanskrit word meaning "hooked cross".  Symbolizing fertility and good fortune, it has been found in the ruins of India, Egypt, Greece and China.

10.  More Russians (civilians and military) lost their lives during the Siege of Leningrad than did American and British soldiers combined during World War II.

11.  The SS ran a brothel in Berlin for foreign diplomats and VIPs called The Kitty Salon.  Twenty prostitutes were hired and trained specifically to glean information from their clients through innocuous conversations.

12.  After the sneak attack on Pearl Harbor, President Franklin D. Roosevelt requested a bulletproof car.  However, presidents were only allowed to spend $750 on a car.  The only one available at that price was Al Capone's limousine, absconded when he went to jail for tax evasion. 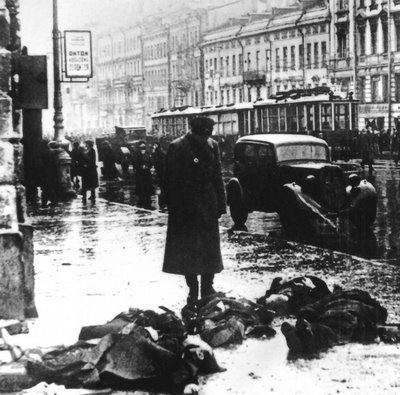