Here are ten facts about the World War II aircraft, the spitfire.

1.  The Spitfire was the only British aircraft to be in continuous production throughout World War II.

3.  The name Spitfire comes from Old English meaning strong or fiery.  Other names considered for the bomber were Snipe and Shrew.

6.  The Spitfire helped Britain win the Battle of Britain even though they were outnumbered in aircraft capacity 2000 to 700.

7.  The Spitfire has been mentioned in movies like Battle of Britain, Malta Story and Reach for the Sky.

8.  There remain 50 Spitfires in the world in operation.

9.  Many pilots were unfamiliar with the Spitfire's innovative retractable undercarriage.  Early accidents were often the result of pilots forgetting to the lower the wheels before landing.

10.  Rather than carrying bombs, some of the Spitfires were modified to house two small barrels of beer. 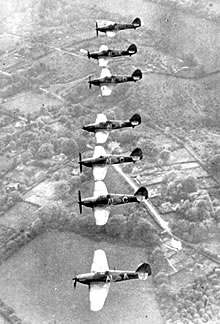 mardenhistory.org.uk
Posted by Linda at 19:21