The Lost Art of Handwriting

"Writing, to me, is simply thinking through my fingers." (Isaac Asimov)

My daughter is working on a novel study project in Grade 5 and each page has to be written in cursive handwriting.  It brings back great memories of the first time I wrote something, and the first time I was allowed to use a pen rather than a pencil.  How privileged I felt!  And yet today I never use my cursive writing skills.

Today is National Handwriting Day, celebrated on John Hancock's birthday, the first man to sign the Declaration of Independence back in 1776.  The day is set aside to celebrate a skill that is a lost of art with the invention of computers.  You can't replace the uniqueness of a signature, the sincerity of a handwritten note.

Handwritten documents have played a vital role in our history:  they have "sparked love affairs, started wars, established peace, freed slaves, created movements and declared independence" (wima.org).  Our history is full of important handwritten documents dating back to 1215 with the Magna Carta.  The writings of artist Leonardo DaVinci have been studied by scholars.  There are 65,000 letters, diaries, reports, military records written by George Washington, veteran of the American Revolution and America's first president.  If you read the cursive letters of Civil War soldiers, you will be amazed at their handwriting and their command of the English language.  The Emancipation Proclamation, which freed the slaves, was handwritten.  Similarly, most of the 1 1/2 million condolence letters written to Jacqueline Kennedy upon the assassination of her husband were handwritten.

Handwriting is not only a lost art but a window to history.  As George Orwell stated:  "Good writing is a windowpane." 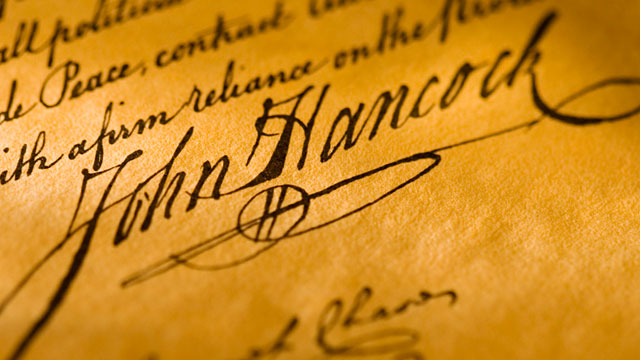