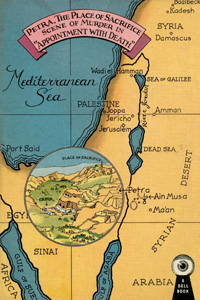 
On vacation in Jerusalem, Poirot overhears a brother and sister conversing about their evil stepmother:  "You do see, don't you, that she's got to be killed," Raymond Boynton tells his sister.  On a trip to Petra, the stepmother is found dead, a needle puncture in her wrist.  Poirot offers to solve her murder in 24 hours.

Sarah King, who relays the tale along with Dr. Gerard, is attracted to Raymond Boynton.  Jefferson Cope wants to take Nadine Boynton away from her husband, Lennox Boynton, and the influence of her mother in law.  Confronted with her strategy to take the young Boynton's away from their mother in law, Sarah confronts Mrs. Boynton who replies:  "I;ve never forgotten anything -- not an action, not a name, not a face."

Poirot sets out to interview all the suspects.  He establishes a timeline which seems impossible.  Sarah King places the time of death well before various suspects claim to have seen the deceased alive.  A hypodermic needle was seemingly stolen from Dr. Gerard's tent.  The poison administered to the victim, digitoxin, was something she already took medicinally.  Poirot calls a meeting explaining how each member of the family discovered Mrs. Boynton's victim, but in turn didn't report the crime, suspecting another member of the family as the murderer.  No one in the immediate family would have needed a needle to commit the crime; they simply would have given her a bigger dose of the medicine already prescribed.  Therefore, Poirot suspects an outsider.

Lady Westholme is revealed as the murderer.  A former inmate at the prison where Mrs. Boynton was a warden, she had it in for the woman.  It was to Lady Westholme, not Sarah, that Mrs. Boynton had addressed her threat.  Disguised as an Arab, she had administered the hypodermic needle.  Eavesdropping in an adjoining room, and not wanting her criminal history to be revealed, Lady Westholme commits suicide.