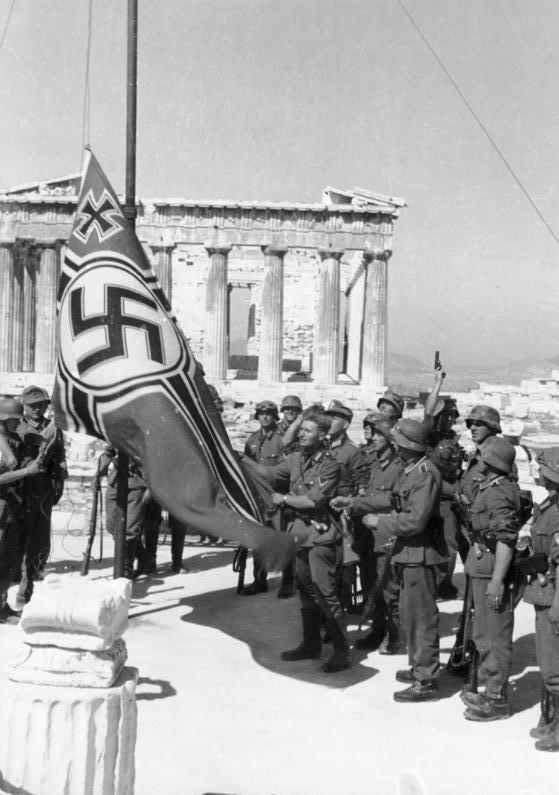 The Nazis raise the Swastika over the Acropolis in Athens, Greece courtesy https://en.wikipedia.org/wiki/Apostolos_Santas.


More than any other building, the Parthenon defines Greece.  As a child, I remember doing a project about the Parthenon, one of a number of ancient buildings in the Acropolis on a hill overlooking Athens, Greece.    Acropolis comes from akron, meaning highest point and polis, meaning city.  The building is no stranger to warfare as it was damaged during the 1687 siege by the Venetians when gunpowder stored inside was hit by a cannonball.

It is no surprise that on April 27, 1941, the Nazis claimed the city of Athens by planting their flag on the Parthenon.  Little did they know that only a month later, two university students, Manolis Glezos and Apostolos Santas, would climb the Parthenon in the dead of night, tear down the Swastika and replace it with the Greek flag.  It became known as one of the first acts of Greek resistance and the two became folk heroes.

Glezos and Santas, both teenagers at the time, discovered from a library book that the north side of the Acropolis contained a natural cave leading from the base to the top.  Used as a secret passage way in ancietn times, the duo figured that they could climb it undetected.  With only a flashlight and a pocketknife, the two teens sneaked into the cave in the dark of night.  They were disappointed to discover at the exit to the cave that the flagpole was 50 feet high.  It took them three hours to scale the flagpole.  Thrilled, they tore off the Swastika, took some swatches for souvenirs, and threw it to the ground.  They replaced it with the blue and white Greek flag.  Sentenced to death in absentia by the occupying Nazis, the two went into hiding.  Their mothers burned the Swastika swatches as well as diaries explaining their exploits.  The Nazis, however, did not know their identity at the time.


The mountainous country of Greece was long known for its guerilla warfare.  Santas joined one such force, ELAS, in 1943, participating in several battles against the Axis.  While Santas survived the war, because of his Communist leanings, he was again imprisoned under sentence of death in 1948. He escaped from the Makronisos Island prison, however, to Italy where he sought and received political asylum in Canada.  In 1962 he returned to Greece and to more turmoil.  He passed away in his homeland in 2011.

Glezos worked for both the Hellenic Red Cross and the Greek Resistance.  In March of 1942, he was arrested by the Nazis, imprisoned and tortured, contracting tuberculosis as a result of his mistreatment.  Freed, he was arrested again by the Italian occupying forces in 1943.  The Greek collaborators arrested him a third time in 1944; he escaped in September of that year.  The end of the Second World War did not signal the end of Glezos' persecution.  Greece erupted in a Civil War and with his Communist leanings, Glezos was imprisoned yet again.  In total he would spend 11 years in prison and 4 years in exile.  With the restoration of democracy in Greece n 1974 Glezos was elected a member of the Greek Parliament.  He continues his political protest activity to this day, arrested as recently as 2012 by riot police.

Manolis Glezos Communist stamp, with the Acropolis in the background, courtesy https://en.wikipedia.org/wiki/Manolis_Glezos.
Posted by Unknown at 09:32