White Christmas Rakes in the Green

Here are ten facts you may not know about the movie "White Christmas".

1.  The song "White Christmas", though made famous by the movie, was first performed by Bing Crosby thirteen years earlier on the radio show "Kraft Music Hall".

2.  Danny Kaye's role was intended for dancer/actor Fred Astaire who declined it.

4.  Vera Ellen only danced in the movie.  Her dubbed songs were actually sung by Rosemary Clooney and Trudy Stevens.

5.  The Haynes sisters' brother, Freckle Face Haynes never appears in any scenes.  The audience does see his photograph, however, which is a picture of actor Carl "Alfafa" Switzer.

6.  Vera Ellen danced with the New York City Rockettes at the tender age of 18.

9.  The Vermont inn featured in the movie was the refurbished inn from another Bing Crosby film, Holiday Inn.

10.  Prominent dancer George Charkiris, who dances with the Haynes sisters, later went on to win a Best Supporting Actor Oscar for his role in West Side Story.

For more information, read my post "White Christmas" at http://alinefromlinda.blogspot.ca/2011/12/white-christmas.html. 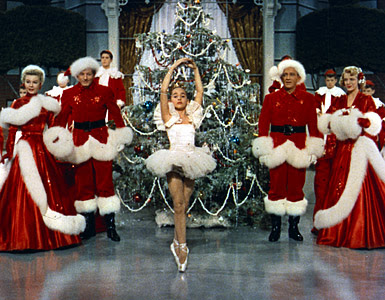