The Most Famous Christmas Movie

Last night, we watched the 1947 classic, "Miracle on 34th Street", the most famous New York City Christmas movie.  In the summer of 2012, when Rob and I walked to the Empire State Building, spotted Macy's and realized we were on 34th Street, it was a surreal moment for us; all the memories of the movie came flooding back.  Here are fifteen facts you may not know about the movie.

2.  Edmund Gwenn, who played Kris Kringle in the movie, also played Santa Claus in the Macy's Thanksgiving Day Parade of 1946.

3.  Edmund Gwenn's character replaced the drunk Santa in the parade.  In 1948, the New York Times magazine reported a "Santa who grabbed a trim young mother, set her on his knee and suggested they both go out and have a drink".

4.  In the opening scene of "Miracle on 34th Street", Edmund Gwenn's character walks down a New York City street and notices Santa's reindeer in a store window.  Rudolph, however, is missing. While Rudolph had already been invented in 1939 in the Gene Autry song, he did not become popular until the 1964 TV special "Rudolph the Red Nosed Reindeer".

5.  Edmund Gwenn's character was given a psychological test in which he had to answer a series of questions including "Who was the Vice President of the united states under John Quincy Adams?"  He answered it incorrectly by saying "Daniel D. Tompkins."  The correct response should have been John C. Calhoun.

6.  The headline "'Kris Kringle Krazy!  Kourt Kase Koming Kalamity!"'  Kry Kiddes" was probably inspired by the absurd headlines run by the Daily Variety in the 1930's and 1950's including "Sticks Nix Hick Pix".

8.  A little Dutch girl meets Santa at Macy's and sings the traditional Dutch song "Sinterklaas Kapoentje".  Edmund Gwenn's character, who happens to speak Dutch, sings along with her.

9.  A real life rivalry did exist between the two departments stores, Macy's and Gimbel's, from 1910 until 1987, when the latter when out of the business.

10.  Every year at Christmas time, U.S. courts re-enact the trail of Kris Kringle for children.

11.  Screen writer Valentine Davies was inspired to write "Miracle on 34th Street" after Christmas shopping in 1944.

12.  Edmund Gwenn grew a white beard and gained 30 pounds for the role of Kris Kringle.  He won an Oscar for his performance. 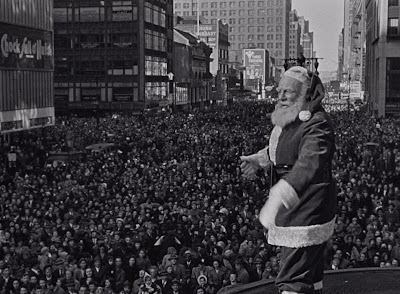