He graced the cover of over 50 magazines around the world.  He was world champion at 18 years of age.  He revolutionized the sport of karate.  He inspired the character Mr. Miyagi.

Born and raised in Japan, Fumio Demura quickly acquired a black belt in karate.  He won the world karate championship at 18 and the All Japan Karate Championship in 1961.  In 1965, he was invited to move to the United States to teach karate full time.  It was in Orange County, California that he started training actor Steven Seagal in martial arts.

In the 1980's, he started training actor Pat Morita, the actor who would play the bonsai-trimming Mr. Miyagi in The Karate Kid.  Demura served as Morita's stunt double in the film, as well as three sequels.  He went on to train many others in martial arts.  The karate master authored a book on the subject called Nunchaku.

Note:  Currently, a documentary is being filmed titled The Real Miyagi:  The Man Behind It All (https://www.indiegogo.com/projects/fumio-demura-the-real-miyagi#/story). 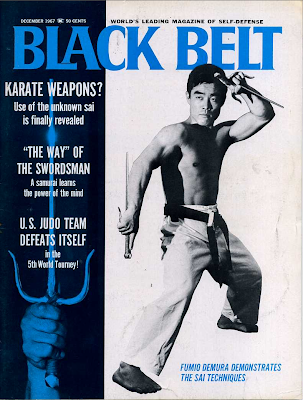