This Wall Will Fall

A small prayer group gathered in a large church in Leipzig, Germany back in 1982 on Monday evenings to pray for the Berlin Wall to come down.  Each week Pastor Christian Fuhrer led the group at St. Nicholas Church.  In time the group grew in numbers.  The faces sometimes changed but the prayer remained the same.  Even the vandals who sprayed graffiti on the sides on the concrete divider at the Brandenburg Gate had it right:  "This wall will fall.  Beliefs become reality."

Back in 1963, President John F. Kennedy stood in front of a crowd 450,000 strong shouting "Ich bin ein berliner", praising West Berlin for surviving amidst the oppression of East Germany (the Berlin Blockade of 1947-48 to name one instance), and pleading with democracies everywhere to unite in one purpose to overcome communism.

Again in 1987, President Ronald Reagan stood in front of the Brandenburg Gate and shouted;  "Mr. Gorbachev, tear down this wall!" in front of a crowd 45,000 strong.

By 1989, East Germany was ripe for revolt.  Demonstrations were taking place in other cities in addition to Leipzig.  That September, Pastor Christian Fuhrer led his flock in a peaceful demonstration that started at his church and wound its way through the streets of Leipzig to the Stasi Headquarters.  As they walked, their numbers grew, swelling to 70,000.  Risking the wrath of the Stasi, knowing they could be arrested or gunned down in a hail of bullets, they protested openly, refusing to back down.

Within weeks of the peaceful but powerful demonstration, the Berlin Wall was surrounded once again by a crowd thousands strong.  On November 9, 1989, East Berliners arrived with sledgehammers and bit by bit watched the symbol of oppression and death crumble to the ground as they hacked away at it.  Although it took 18 months to completely dismantle the Berlin Wall, it was the beginning of the end of East Germany.  What the graffiti artist had predicted came true; I would have added one extra word to his statement, though.  "This wall will fall.  Christian beliefs become reality."  Never underestimate the power of prayer! 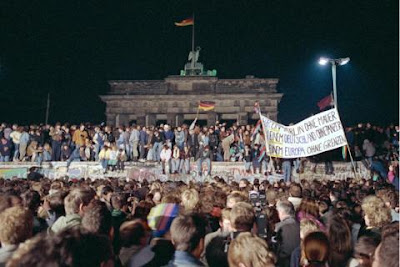