Jean Fritz: When I Discovered Libraries, It Was Like Having Christmas Everyday

"I never felt truly American.  When I finally got to America, I wanted to put down roots, and did it through history." (Jean Fritz)

Jean Fritz was born in 1915 to American missionaries in China.  An only child, she felt isolated, but books helped her conquer her solitude.  At age five, Jean declared that she would become a writer when she grew up.  She attended a British school until Grade 8 when her family fled China, aboard the President Taft, due to anti-Western rioting.

In the United States for the first time, Jean explained:  "I never felt truly American.  When I finally got to America, I wanted to put down roots, and did it through history."  Jean, wanting to find out more, performed the childhood rite of passage by signing up for a library card.  "When I discovered libraries, it was like having Christmas everyday."  Every book was like a gift, especially treasures like The Secret Garden and Just So Stories.

Jean attended university, and after a short career in teaching, moved to Dobb's Ferry, New York where she volunteered in the public library.  She helped set up a new children's department; her work there would inspire her later children's books.

After dabbling in poetry in high school and university, Jean tried her hand at short stories, some of which were published in Humpty Dumpty in the 1950's.  Her first book, Fish Head, published in 1954, featured a stowaway cat on a fishing boat.  Her first historical novel, The Cabin Faced West, was published in 1958.  Jean went on to publish a series of historical books for children including What's the Big Idea, Franklin?, Who's That Stepping on Plymouth Rock?, and You Want Women to Vote Lizzie Stanton?  Jean won the Laura Ingalls Wilder Medal for her "substantial and lasting contribution to children's literature". 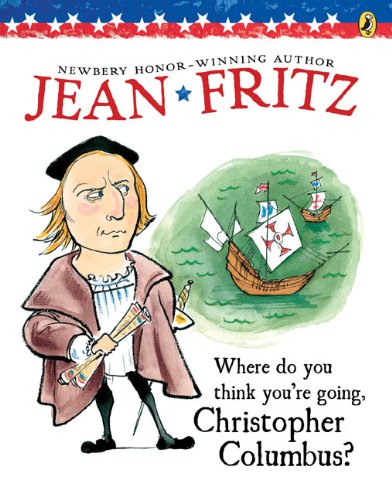