Rodgers & Hammerstein's "The King and I"

"The King and I is really a celebration of love in all its guises, from the love of Anna for her dead husband; the love of the King's official wife, Lady Thiang, for a man she knows is flawed and also unfaithful; the desperation of forbidden love; and a love that is barely recognized and can never be acted upon." (https://en.wikipedia.org/wiki/The_King_and_I)

The King of Siam with nine of his children courtesy https://en.wikipedia.org/wiki/The_King_and_I.


Rob and I saw "The King and I", based on the book Anna and the King of Siam, at the Stratford Theatre about twelve years ago.  What struck me the most about the musical was the beautiful costumes.  Set during the 1860's in Siam (Thailand), the story follows a widowed British schoolteacher who is hired to educate the King Mongkut's children.  The King is attempting to modernize his country and the education of his offspring is part of that plan.

He and the schoolteacher, Anna, clash on many occasions as they disagree in how the children should be taught.  At the same time, they are drawn to each other, and end up falling in love, a forbidden love that they cannot act upon as the King is already married.  In fact, the King has more than one wife; his official wife loves him despite his unfaithfulness.

Theatrical attorney Annie Holtzmann came upon the book Anna and the King of Siam (1944) and presented it to her client, Gertrude Lawrence, suggesting that it would be a good play for her to star in to revive her fledgling stage career.  The attorney contacted composer Richard Rodgers and dramatist Oscar Hammerstein, who had already written four musicals.  Rodgers worked his magic, composing hits such as "Shall We Dance", "I Have Dreamed' and "Who Would Refuse?' and they had an instant hit on their hands.  Yul Brynner starred as the king alongside veteran actress Gertrude Lawrence.

The musical premiered on March 29, 1951 at the St. James Theatre on Broadway.  The role was taxing for Lawrence, who at 52, had to wear 75 pound dresses as she walked and danced 4 miles across the stage over a 3 1/2 hour period, eight times a week.  In September of 1952, she discovered she had liver cancer and passed away.  She was buried in a ballgown she wore in Act II.  The King and I continued with a new leading actress for another year and a half.  It closed after 1246 performances, the fourth longest running musical in history. 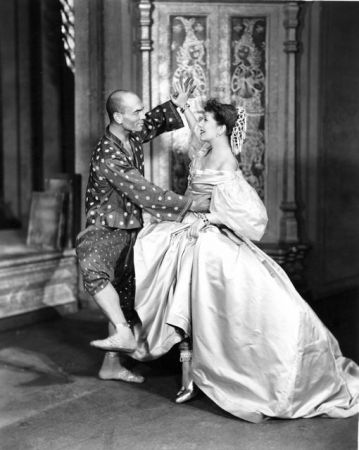 Yul Brynner & Gertrude Lawrence dance to "Shall We Dance?" circa 1951 courtesy https://en.wikipedia.org/wiki/The_King_and_I.