The Wizard of Oz premiered on June 16, 1902 at the Grand Opera House on the banks of the Chicago River.  It had the trademark Tin Man, Scarecrow and Cowardly Lion, although the Tin Man was dressed in a Scottish kilt.  It had the famous tornado scene.  But Toto the Dog was changed to Imogene the Cow.  The Wizard had a prominent role, but not The Wicked Witch of the West.  A summer hit, the play lasted twelve weeks; by summer's end, it was on its way to Broadway.
(en.wikipedia.org/wiki/The_Wizard_of_Oz_(1902_musical))

L. Frank Baums' novel, The Wizard of Oz, was published by a Chicago printing press in 1900.  Its first edition of 10,000 copies was sold before its September 1 publication date.  The original play premiered at Chicago's Grand Opera House and received rave reviews.  The production starred Anna Laughlin as Dorothy Gale, Fred Stone as the Scarecrow, David C. Montgomery as the Tin Man and Arthur Hill as the Cowardly Lion. 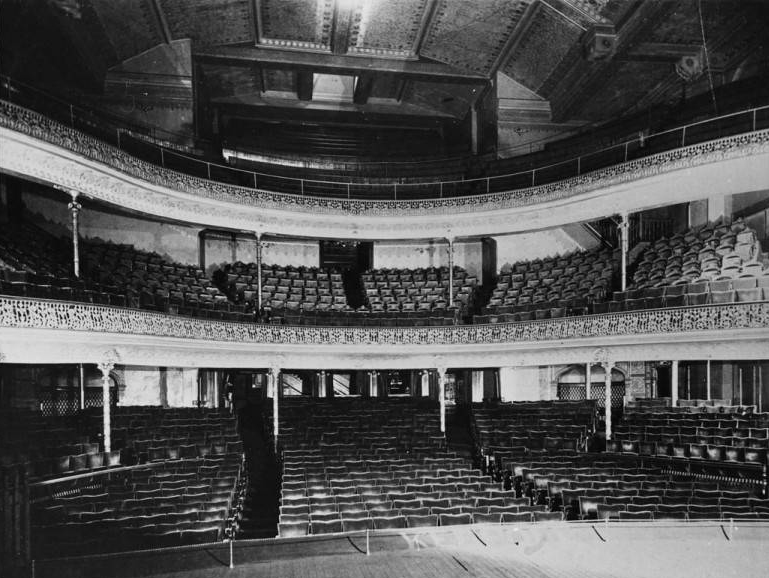 
After a twelve week run, and a tour of the upper Midwest, The Wizard of Oz premiered on Broadway in 1903 at the Majestic Theatre on Columbus Circle.


"It became the favorite of a generation.  The audiences couldn't get enough.  The tornado scene!  Fred Stone's boneless scarecrow walking about on his ankles!  The lovely all-girl poppy field!  The glittering Emerald City!  The audience came back for seconds and thirds.  They brought their kids.  Everyone bought the sheet music, the phonograph records, the player piano reels, and Baum's original novel!  Oz had entered the American consciousness." (http://www.nypl.org/blog/2011/12/15/musical-month-production-history-1903-oz)

Decades would pass, but The Wizard of Oz would not be forgotten.  In 1939, the film version premiered starring Judy Garland as Dorothy, Ray Bolger as the Scarecrow, Jack Haley as the Tin Man and Bert Lahr as the Cowardly Lion.  This time, the Wicked Witch of the West, played by Margaret Hamilton, had an unforgettable role.  I remember watching this version on T.V. when I was a little girl.  The characters followed the yellow brick road to the Emerald City where Oz granted Dorothy her three wishes:  the Scarecrow received a skeleton, the Tin Man, a heart, and the Cowardly Lion, courage.  Dorothy's wish, granted by the Good Witch, happened when she clicked her sparkly red shows together and ended up back in Kansas, with her little dog Toto nipping at her heels. (en.wikipedia.org/wiki/The_Wizard_of_Oz_(1939_film)#Cast)