In 1950, St. Louis thrived with almost 1 million people.  Today, with only 300,000 residents, it is a picture of decay with old rail beds and unsightly riverfront property.  What happened to the Gateway City? St. Louis was founded by two French explorers in 1764 and served as a trading post.  With the mighty Mississippi running right through the town, it soon developped a river bound economy.   With the Industrial Revolution, it also became an industrial town.

In the 1840's, the city was flooded with Irish and German immigrants who filled the factories.  The Germans later supported the city when it joined forces with the Union in the Civil War.

St. Louis was the place to be right after the turn of the last century when it hosted both the World's Fair and the Olympics. St. Louis employed thousands in the war industry in the 1940's.

The population peaked in 1950 at almost 1 million residents.  But like so many American cities, white flight started shortly thereafter and picked up speed in the 1960's and 1970's.  The suburbs became richer as the inner city became poorer.  Blacks were restricted to the north end of the city until after the Second World War. 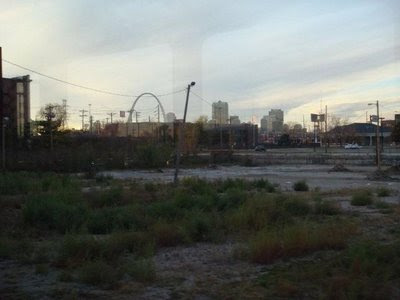