Ever since I started keeping a blog, I have felt a sense of liberation. There is no better feeling than to know that you have a voice and that your voice matters. Here is a journal entry that I made back in 2008 as part of my online writing course.

I just finished reading The Freedom Writers Diary with Erin Gruwell. Ms. Gruwell's story was recently made into a movie starring Hillary Swank. In 1994, Erin Gruwell was a new high school teacher in Long Beach, California assigned to teach a group of "unteachable, at-risk" students. Rather than saying they had nothing to offer, Ms. Gruwell told each and every student that they indeed had something valuable to offer. She encouraged them to keep a journal. The students were hesitant to do so. However, eventually, every last student took her up on her suggestion. At first, they didn't write about Shakespeare or Tolstoy; they wrote about their everyday lives. Many of them came from single parent homes; some faced eviction; some had parents who were alcoholics or drug addicts; many belonged to gangs and faced death everyday. The writing process became cathartic for them. The more they wrote,the more they wanted to write. Suddenly, they were on fire to write; some stayed late into the evening to complete their latest writing assignment. A local businessman even donated 35 computers so that the students could type rather than write their assignments. These journal entries were eventually published as The Freedom Writers Diary.

Erin Gruwell not only turned them on to writing, but also reading. Once they had established their journals, she introduced them to literature, starting with The Diary of Anne Frank. The students were so moved by Anne Frank's writing that they invited the Dutch woman who sheltered her, Miep Gies, to visit them in the United States. They raised enough money to pay for her round-trip plane ticket. Ms. Gruwell also had them read Zlata's Diary: A Child's Life in Sarajevo about a young girl from Yugoslavia who experienced atrocities of the Bosnian War in the 1990's and eventually fled to Ireland. Once again, they invited Zlata to their school. Bosnia and L.A. didn't seem so far apart after all: while Zlata had experienced the Bosnian conflict, the American teenagers had experienced the L.A. riots. Her message of hope was just what they needed to hear.

Erin Gruwell didn't simply feed her students information; she lit a fire beneath them. They developped a burning desire to learn more. They also read about Rosa Parks who sparked the bus boycott staged by the "Freedom Riders" in the 1950's during the early phase of the American Black Civil Rights movement. One student suggested that since they were avid writers attempting to overcome adversity, they should name themselves the "Freedom Writers". Ms. Gruwell not only gave them a taste for literature, but also for history.

The learning became infectious and soon everyone wanted to be in Erin Gruwell's English class. She made these former gang members put down their weapons and pick up a pen. She made them realize that their stories mattered: every story had worth just as every life had worth. The Freedom Writers achieved great success, many of them going on to college or university after their high school graduation. They were even interviewed by a People magazine reporter as well as by Connie Chung on "Prime Time Live". What an inspiration! 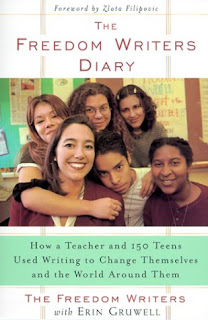