The Berenstain Bears and a Leap of Faith

Today, my son gave his collection of Berenstain Bears, Mama, Papa, Brother and Sister to my daughter. Those bears bring back great memories for my husband and I. It was the Christmas of 1996. We were trying to start a family, but had suffered two miscarriages. Christmas was a particularly hard time of year, given that we had no children to share the holiday with. However, we chose to hold firm to our plan. Buying the Berenstain Bears was a leap of faith. At that point, we had no children, but I was determined to have the mindset of "When,not if, we become parents". I hoped that one day we would have a healthy child to cuddle those bears.

The following June, after suffering a third miscarriage, we decided that we wanted to adopt a newborn. In the meantime, we did our homestudy, a series of questions posed by a social worker to see if you are ready to be parents. I jokingly called it "The Spanish Inquisition". We completed our homestudy that September and then settled down to wait. Incidentally, part of our homestudy included photographs of us and our families. One photo I had chosen featured the four Berenstain Bears sitting on our dining room table heaped with Christmas presents.

I handed out 400 "business cards" in an attempt to make connections. One of the people I told was an elderly fellow that swam at the Gretzky Centre named Lonnie. Lonnie always tried to be supportive and whenever I saw him he would reassure me that on Christmas Eve, he was going to show up at my door with a bundle of joy in his arms. We would laugh and then go back to our swimming.

Through my networking, I found out about Beginnings Adoption Agency in Hamilton. We went for an interview the following April and were placed on their active waiting list along with 29 other couples. Birthparents then reviewed the profiles of these couples and were offered the choice of three profiles to choose from. On November 30, Rob put up the Christmas tree. He was in a melancholy mood thinking that we would celebrate another Christmas without children. However, God had a different plan in mind. The following day, we got a phone call asking if we were still interested in a baby. Were we? I jumped 10 feet in the air. Within 3 days we met the birthparents. Two days later we took them out for dinner. And on December 9, the birthmother gave birth to a bouncing baby boy weighing 9 pounds. It was a strange feeling visiting your own child at the hospital. Because the adoption happened so quickly, the paperwork was not yet complete and our son went to stay with a foster family for a few days. However, on December 22, we brought our baby home. On Christmas Eve, we introduced him to my husband's family. And on Christmas Day, we visited my family. My mom placed our bundle of joy under the Christmas tree and took a picture. He was our best Christmas present ever!

I believe that God had our meeting planned from the beginning (although I didn't have the date pinned down the way Lonnie did). I believe that He gave us our little boy. I say thank you to our son's birthparents for having the strength to give him to us. What a selfless act! And now I look at the Berenstain Bears sitting on my daughter's bed. Yes, buying them was a leap of faith. But I'm so glad that my husband Rob and I took that leap. When I look at our son, I am thankful. 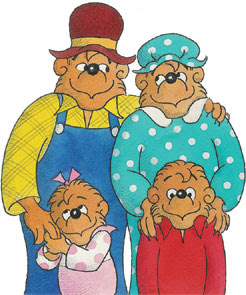