"We returned to Cincinnati but could get no booking.  I think it was because the Wagenfuhrer woman had imposed on the public." (Annie Edson Taylor) 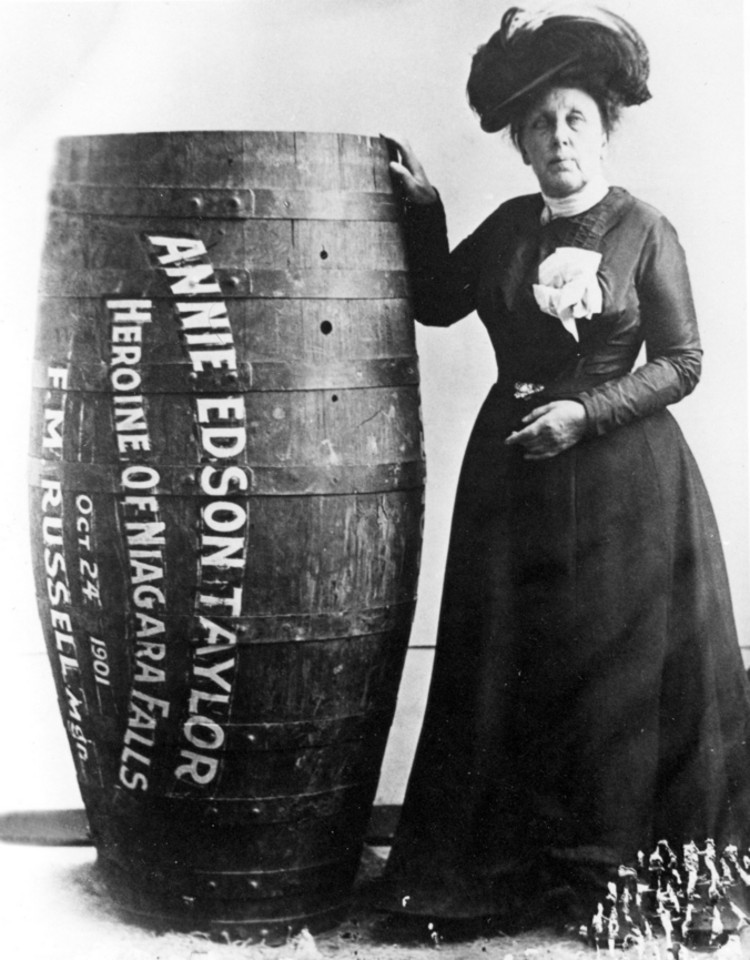 It was October 1901 and the plump 63 year old schoolmarm Annie Edson Taylor had a unique retirement plan.  She would go over Niagara Falls in a barrel and use her star status to make enough money to live on.

Mrs. Taylor, who lost her husband in the Civil War, had eked out a living as a charm school teacher in Bay City, Michigan.  Her students, however, dwindled over the years; no one wanted to learn how to dance from an old, portly woman.  She concocted a scheme to go over Niagara Falls in a barrel, a feat never performed before.

On October 24, 1901, a rowboat towed Mrs. Taylor's oak barrel out to Grass Island where she, petticoats and all, tucked herself into it.  After 20 minutes of bobbing up and down the Niagara River, Mrs. Taylor made the terrifying plunge over the precipice, landing in the gorge below.  Miraculously, the barrel was not cut to shreds on the sharp rocks that poked out of the water.  The barrel was retrieved by a group of men who pulled the schoolmarm out unharmed, save a scratch on her forehead.  The New York Times touted the headline:  "Woman Goes over Niagara in a Barrel."

Annie Edson Taylor thought her work was done.  She was immediately inundated with offers for carnival tours, lecture series and public appearances.  But her work had only just begun.  For promoting herself was more difficult than she first thought.  Once the public found out that Mrs. Taylor was an old woman, their interest in her started to wane.  To complicate matters, her promoter, Mr. Russell, had his own way of doing things.  In a 1902 letter to the Lyceum, Mrs. Taylor complained about Mr. Russell:  "His villainous temper, worse grammar and spelling disgusted all those with whom he attempted to do business." (www.morkanshorse.com/dust-off/woman-of-wonderful-nerve)

Furthermore, a much younger daredevil Martha Wagenfuhrer had stolen Annie Edson Taylor's thunder.  As Mrs. Taylor wrote in her letter:  "We returned to Cincinnati but could get no booking.  I think it was because the Wagenfuhrer woman had imposed on the public." Mrs. Wagenfuhrer, the Maid of the Rapids, also had a barrel.  Her claim to fame was riding the Niagara Rapids.

She had planned her trip for September 6, 1901, the day that President McKinley would be attending the Pan Am Exposition in Buffalo, with a side stop at Niagara Falls.  Sadly, the president was felled by an assassin's bullet at the exposition and he never made it to the Falls.

Mrs. Wagenfuhrer came close to death as well that day.  Climbing into her barrel around 6 pm, she rode along the Niagara Gorge, getting caught in the Whirlpool Rapids for a full hour.  Finally, a Great Gorge Railway Illumination Car was hailed to search for her barrel in the descending darkness.  By the time Mrs. Wagenfuhrer was extracted from the barrel, she was unconscious; rescuers took 10 minutes to resuscitate her. (reservationsystems.com/niagara_daredevils/martha_wagenfuhrer)

Although the Queen of the Falls had performed a much more spectacular feat than the Maid of the Rapids, the latter was a much younger, more beautiful woman.  Furthermore, audiences were not receptive to Taylor's monotone voice and lack of presence.  On the other hand, "as a vaudevillian, [Wagenfuhrer] had a brassy stage presence that Taylor couldn't hope to replicate."

Mrs. Taylor, frustrated due to her lack of engagements, fired her promoter who in turn started working for the more marketable Mrs. Wagenfuhrer.  He absconded with the famous barrel, leaving the Queen of the Falls high and dry.  Annie Edson Taylor struggled financially for the next two decades.  She passed away, "blind, broke and ailing," on April 30, 1921.