The sunflower seed originated in North America where it served as one of the first crops for hunter-gatherers.  It was planted in Mexico 5000 years ago.  The flower was worshipped by the Aztecs.  It was farmed by the Cherokee Indians.

It was later discovered that if the seed was ground up with flour, it could make a pita type bread. Some used it to make a purple dye.  Others used it as a snake bite remedy.  Still others, as an oil for dry hair and skin.

By the 16th Century, sunflower seeds were taken to Spain and planted.  The sunflower spread to other coutnries in Europe.  Peter the Great visited Holland and admired the sunflower plants, returning to Russia with some in his pocket.  The demand for sunflower oil grew in Russia as it was consumed during Lent, a time when the Orthodox Church forbid consumption of all other oils.  Before long, Russia was growing 2 million acres per year of sunflowers. 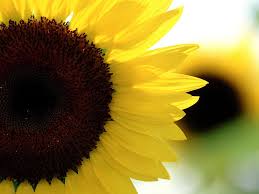