With Victorian London's streets full of horse manure, pedestrians shoes became very dirty fast.  With the support of the Ragged Schools, a shoe black brigade was formed in 1851.  Organizers thought that shoe shining was a relatively safe way (compared to chimney sweeping) to earn money.  Their savings could later be used to immigrate to America. Shoe blacks, situated on the Strand, Piccadilly, Regent Street and Holborn, could earn 8s 6d per week.

In 1851, the London Shoe Black Brigade was formed.  A licence cost 5 shillings per year.  With The Great Exhibition fast approaching, organizers saw it as a chance for shoe blacks to shine -- literally -- the shoes of foreign visitors.  During the six month exhibition, 25 shoe blacks shined 101,000 pairs of shoes for a total of 500 pounds.  Five of the boys used their money to immigrate to America.  At its peak, a dozen brigades were operating, each with its own distinct uniform. 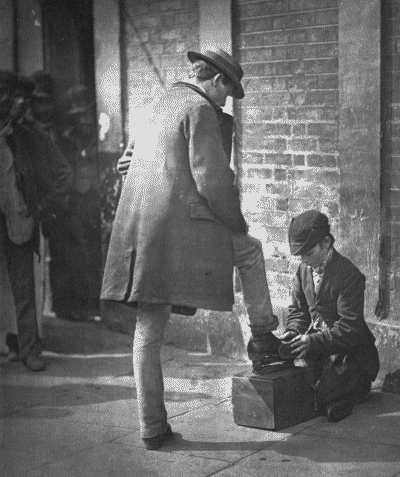 http://www.victorianlondon.org/publications/thomson-36a.png
Posted by Unknown at 11:26