"It is something like being embedded in a dilation of pea's pudding, just thick enough to get through it without being wholly choked or completely suffocated." (http://www.victorianweb.org/victorian/science/environment/1.html)

A London particular, or pea souper, refers to the thick green, yellow or black fog filled with soot particulates and sulfur dioxide.  London has been cursed with thick fogs for centuries.  King Edward I tried to ban coal fires in London as far back as the 13th century (http://vichist.blogspot.ca/2006/11/london-fog.html).  London's air pollution problem persisted in the 17th Century due to the burning of cheap sea coal.  By the 19th Century, the dilemma was exacerbated by chimneys which emitted coal from burning stoves and mixed with the fogs of the Thames Valley.  Even the precipitation was black at times:  London had an early introduction to acid rain.  Buildings such as St. Paul's Cathedral, a pale stone structure, turned black as coal during Queen Victoria's reign. Just as chimneys were a huge source of pollution so too was the River Thames.  While fog often lingered above the river's surface, beneath the surface lay London's waste, filling the air with a foul odour.  French artist Claude Monet made trips to London between 1899 and 1901 where he captured a stereotypical pea-souper.  From his vantage point on the second floor of St. Thomas' hospital, Monet painted London's Parliament Buildings.  Although Monet complained about the elusive Victorian sun, he did manage to capture it reflecting off of the River Thames.  Ironically, the London fog, rather than decreasing with the rising of the sun, often increased.  "The browned and yellowed skies provide snapshots that are 'a proxy indicator for the Victorian smogs and atmospheric states they predict.'" (http://www.telegraph.co.uk/news/1525920/Monets-view-of-London-casts-light-on-Victorian-pollution.html) 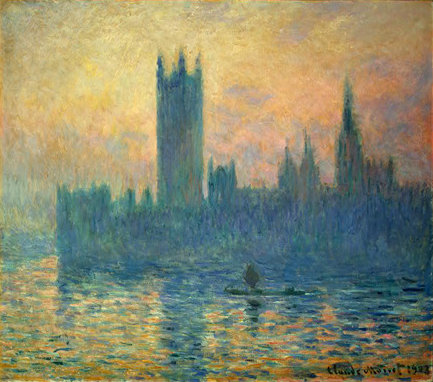 Gas lamplights, first introduced on London streets in the early 1800's, could be dangerous to the health.  "The image of a Victorian lady fainting is as likely to be due to lack of oxygen caused by gas lighting as an overly tight corset." (http://www.countrylife.co.uk/property/guides-advice/gas-lighting-in-victorian-times-16562)  The gas, as well as giving off noxious fumes, blackened walls and ceilings.

London's industry of the 1800's contributed greatly to the foul air.  The city, attracting country residents to new jobs, was growing at a rapid rate.  These newcomers, however, lived right beneath the London smokestacks.  "Did the workers lose more in ill health than they made in higher wages?" http://www.bbc.co.uk/history/trail/victorian_britain/social_conditions/victorian_urban_planning_08.shtml

While people choked on the London fog, they also lost their way.  Omnibuses ran right off the road, drunken youths fell into the River Thames and a coal barge ran into Vauxhall Bridge and sank.

London's fog problem came to a head in the winter of 1952 when The Great Smog hit http://alinefromlinda.blogspot.ca/2011/12/proper-pea-souper.html.  The air pollution problem was not resolved until legislation was enacted in 1956.

The Great Smog at Piccadilly Circus circa 1952 courtesy http://www.telegraph.co.uk/news/earth/countryside/9727128/The-Great-Smog-of-London-the-air-was-thick-with-apathy.html

For more information, read London Fog:  A Biography by Christine Corton at https://www.amazon.ca/London-Fog-Biography-Christine-Corton/dp/0674088352.