Malcolm Gladwell's "The Art of Failure"

"Human beings sometimes falter under pressure.  Pilots crash and drivers drown.  Under the glare of competition, basketball players cannot find the basket and golfers cannot find the pin.  When that happens, we say variously that people have panicked, or to use the sports colloquialism, choked.  But what do those words mean?  Both are pejoratives.  To choke or panic is considered to be as bad as to quit.  But are all forms of failure equal?  And what do the forms in which we fail say about who we are and what we think?  We live in an age obsessed with success, with documenting the myriad ways, by which talented people overcome challenges and obstacles.  There is as much to be learned though from documenting the myriad ways in which talented people sometimes fail."

It's the Wimbledon final match.  Big name Steffi Graf faces off against newcomer Jana Novotna.  The latter is one point away from winning the match.  The eyes of the world are watching.  Even the Duke and Duchess of Kent sit in the stands.  Jana winds up and smashes the ball straight into the net.  Her swing was half hearted, no legs, no torso, all arm.  A comedy of errors led to her losing the match, a match she had in the bag only minutes before.  Jana Novotna rested her head on the chest of the Duchess of Kent and sobbed.  She had choked.

A women is learning how to scuba dive.  She takes a routine dive with another diver.  Their task is to take out one breathing tube and put in another.  The woman does so, but breathes in water rather than air.  She panics, grabbing the regulator of her partner, when all she had to do was put the other tube back in her mouth.

John F. Kennedy Junior, a new pilot, is flying his wife and sister in law to a family wedding.  He follows the coastline along the Connecticut shore.  Then he heads out into the Atlantic, and becomes disoriented due to the lack of light.  He pitches right, then left.  Soon, he finds himself in a dive that he can't pull out of -- a graveyard spiral.  The plane plunges into the Atlantic.  He panicked. 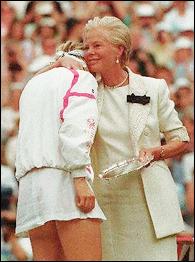 Jana Novotna being consoled by the Duchess of Kent at the Wimbledon final circa 1993 courtesy www.rankopedia.com/Most-Poignant-Sports-Moment/Step1/10875/.htm.