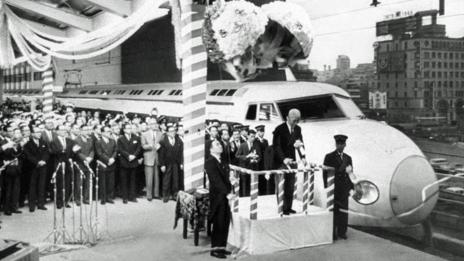 
In the two decades after World War II, Japan dug itself out from the rubble and rebuilt the country.  With lightning speed, new cities appeared on the landscape.  And with those new cities came new technology.  In preparation for the Tokyo Olympics, Emperor Hirohito launched the Bullet Train on October 1, 1964. It would be the fastest, most advanced train in the world.

At a time when the fastest British train only reached speeds of 100 miles per hour, The Shinkansen was designed to travel at an unheard of 150 miles per hour.  The train looked like nothing anyone had ever seen before with its nosecone, hidden wheels, and shiny white paint.  A railroad was built between Tokyo and Osaka that featured 67 miles of tunnels and over 3000 bridges.  Japan prepared to greet the world with its modern technological marvel.

Travelling to Japan became fashionable.  Not only athletes would take on the train but also celebrities.  At the height of Beatlemania in 1964, the British foursome made a trip to Tokyo.  Singer Ella Fitzgerald also paid a visit to Tokyo.  With its snow capped mountains and cherry blossoms, train passengers could enjoy Japan's scenery in comfort.  The train offered reclining seats, a quiet, vibration free ride, and service provided by impeccably dressed hostesses.  The Shinkansen, well ahead of its time, was the precursor to France's TGV's, Germany's ICE's and Italy's Pendolino's.

Over the decades the Bullet Train has carried 5.5 billion passengers.  Despite its speed of 199 miles per hour, it has a reputation for safety.  No fatalities have occurred on board, despite an earthquake in 2004 and a blizzard in 2013.

Japan is not finished yet.  It is developping a new train, a magnetic levitation that will run above the tracks at the blistering speed of 311 miles per hour.  And it all started with the Tokyo Olympics. 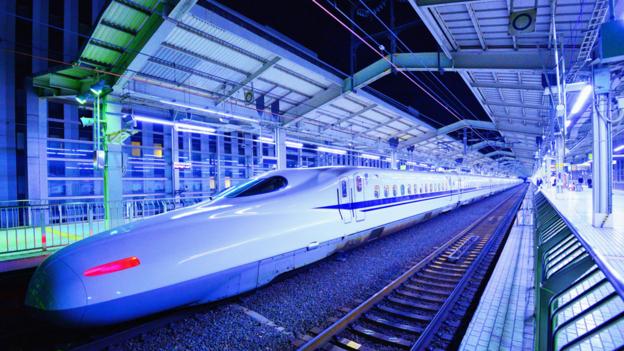