Times Square: The Crossroads of the World 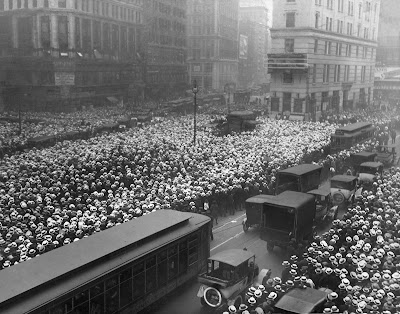 Located at Broadway and 7th in Midtown Manhattan, it was originally called Longacre Square.  However, when the New York Times headquarters moved to the area in 1904, it was renamed Times Square.  "Times Square quickly became New York's agora, a place to gather to await great tidings and to celebrate them, whether a World Series or a presidential election", quotes James Traub in The Devil's Playground.

In 1921, crowds gathered to watch the highly publicized fight between Jack Dempsey and Charpentier.  Coupled with sports events came the gambling. One Times Square was an early New York skyscraper along with the Flat Iron Building.  By the 1930's the skyline started to change with the additions of the Chrysler Building and the Empire State Building.

In 1945 Times Square was the site of the famous photograph of an American sailor kissing a nurse on V-J Day.  A ticker tape parade traced its way down New York City's streets to celebrate the end of World War II. 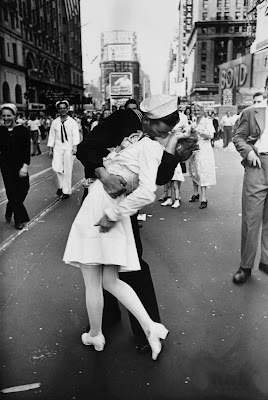 Photo of V-J Day in Times Square in August of 1945 courtesy http://en.wikipedia.org.

Eventhough prices were high, standards were low from 1960's to the mid-1990's in Times Square where go-go bars, sex shops and adult theatres appeared on every corner.  Times Square was a veritable red light district -- not the place to bring a family. The New Year's Eve Ball Drop, a tradition since 1904, saw 2 million attend in 1999, a crowd that would rival that of V-E Day in 1945.  In 2003, the giant jumbotrons that light up Times Square went dark due to the Northeast Blackout that August.  By 2011, Times Square was declared a smoke-free zone, with a heavy penalty for those not enforcing the law.

Visit Times Square today and you will feel the vibrancy of the city.  Businessmen rub shoulders as they head to the office in the day or theatre-goers as they head to a play at night.  Even after the sun goes down, you still feel safe there.  See a play, hop a bus, visit a shop, dine in a restaurant.  It's worth the trip! 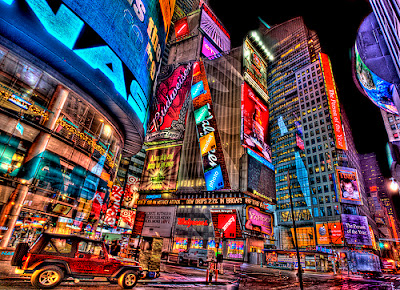