It reads like a movie script:  "Two men and a dog cross American continent in Winton roadster!"  Normally, such a story would not merit the first page of the newspaper.  However, back in 1903, such a trek was no small feat. 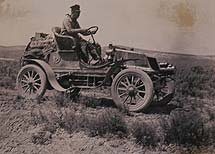 
Horatio Nelson Jackson, a Vermont doctor on vacation in San Francisco, with no car and little driving experience, took a $50 dare to cross the United States in a horseless carriage.  He enlisted the aid of a local mechanic, Sewall K. Crocker, and the two men packed up his new Winton touring car in San Francisco, and headed east across the desert.  At only 20 horsepower, the touring car did not go very fast; of course, it had no roof or windshield so the drivers had to wear goggles.  In the day and age before paved roads (only 150 miles of the entire trek were paved), before gas stations, and before road maps, Dr. Jackson had to rely on his own resources. 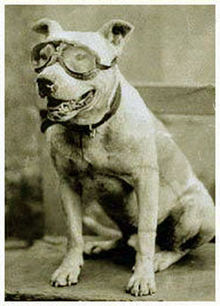 
On the trek, the travelling companions saw caravans of pioneers in Conestoga wagons; they met cowboys with lariats which came in handy to tow their roadster out of sandhills; they encountered ranchers' wives who served them home-cooked meals for a chance to ride in the new automobile; and they even photographed Native Indians in full headdress (in the last days of the frontier).  They also met a pit bull in Idaho which Horatio adopted and named Bud; he was given his own pair of driving goggles.  The co-drivers crossed streams and saw buffalo wallow; they crossed railroad trestles over wide rivers; their roadster spooked horses not used to motorized vehicles. 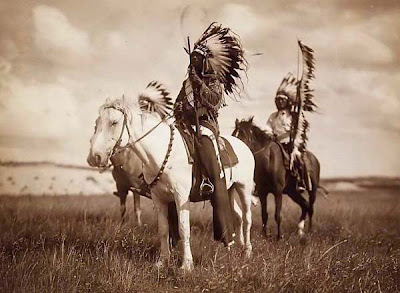 
As word spread about Horatio's drive, crowds started to line the streets of the towns that he passed through.  Some locals would give him the wrong directions just so he would head through the town where that person's aunt or grandma or cousin lived.  What a spectacle to see a horseless carriage!  Nineteen hundred and three was the year that Henry Ford started his company; the age of the Model T was still 5 years away and the age of the car for the common man was still at least a a decade away.  Other car companies got in on the act:  Packard and Oldsmobile both dispatched vehicles with drivers to beat Dr. Jackson to New York City. 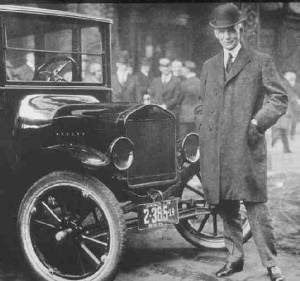 
As Horatio crossed the country, he wrote letter after letter to his wife Bertha with accounts of his adventure:  the flat tires, the burnt out side lanterns, the fuel leak, running out of oil, the tainted water which made Horatio sick, the lost coat (with money inside), the broken drive chain and wheel bearings, and the list goes on.  Even so, Horatio retained an indomitable spirit, bent on finishing the trip that he had started.  After 63 1/2 days, on July 26, the roadster reached New York City.  The touring car had sucked up 800 gallons of gasoline. 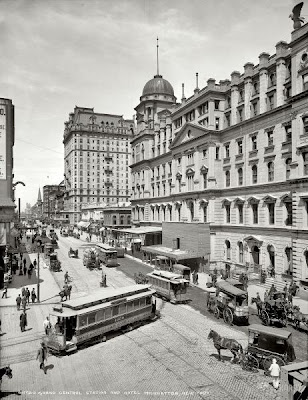 
The car later went into the Smithsonian Institution.  Dr. Jackson returned to Vermont with his dog, Bud where he lived out his life with his wife Bertha.   He later owned a newspaper, bank and radio station and became one of the founders of the American Legion.  Horatio once was fined for driving above the 6 mph speed limit in his hometown of Burlington, Vermont. 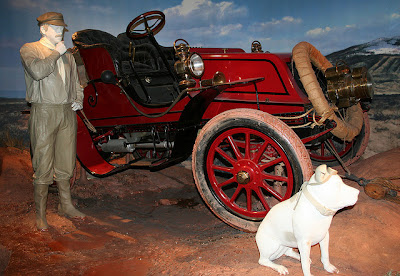 Display of Horatio Nelson Jackson, his dog Bud, and the Winton roadster at Smithsonian courtesy http://farm3.static.flickr.com.