"Outsiders had never been welcome in Neshoba County, whether they were Yankee calvary, carpetbaggers, or federal revenuers..."*

"Mississippi Burning", a movie starring Gene Hackman and Willem Dafoe, is based on a true story which took place during Freedom Summer in rural Mississippi.  On April 24, 1964, the KKK had burned crosses in 66 separate locations, in an effort to scare blacks from signing up to vote.  On June 21 of that year, three civil rights activists from the North, Goodman and Schwerner (white) and Chaney (black), headed south to Mississippi for the summer to help register black voters.  That evening, they visited a burnt out church and on their way back to Meridian, they were arrested by the local sheriff and taken to the county jail.  They were released that same night, but disappeared on a rural road on their way home from the jail.

Two FBI agents, a Northern Liberal, played by Willem Dafoe, and a Southern Conversative, played by Gene Hackman were sent to Mississippi Neshoba County to investage the mystery.  The sheriff's office, linked to the KKK, refused to cooperate with them.  In fact, the duo encountered hostitily at the hands of the police.  The local black community was tortured, many of their houses set on fire.  More FBI agents were recruited.  Although 1000 Mississippians were interviewed, not the white community nor the black community was willing to divulge any information, leading Hackman's and Dafoe's characters to resort to other tactics.

"Mississippi Burning" won Academy Awards, including one for cinematography and one for best actor, Gene Hackman.  It is a frightening tale of the American Civil Rights era and how those who protested the Jim Crow laws, whether black or white, were in the line of fire of the KKK and even the local authorities.

Note:  For further information, read We Are Not Afraid:  The Story of Goodman, Schwerner and Chaney and the Civil Rights Campaign for Mississippi (Cagin & Dray, 1988). 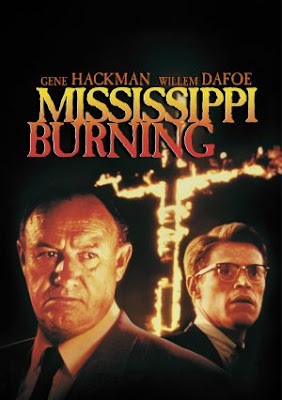