We arrived promptly at 5:00 pm at the school.  I, in my old red dress from 15 years ago, and Thomas, in his new black suit with red shirt and tie walked up the walkway into the school.  In the foyer, we met Lance and Nicole, Thomas' birthparents, who had just arrived from London.  We chatted for a bit and then opened the double doors to the gym.  Inside, it was an Under the Sea Wonderland.  Moving aside the seaweed hanging from the door, we made our way to the corner where a fountain was running surrounded by greenery, donated by one of the Grade 8 parents, with a backdrop of large white bubbles.  The lettering on the bubbles said:  CLASS OF 2012.

We snapped some shots of Thomas and his best friend Riley, aka his YouTube video subject, in front of the fountain.  We made our way around the gym to admire the handiwork of the students, teachers and parent volunteers.  There were fish on the wall, one for each student.  There were drivers' licences personally designed by each student.  Lance spotted Thomas which proclaimed "IMAU2BER".  Lance says that he has seen all of Thomas' videos.  Another corner featured colourful composites of each of the students.  Above us, undersea creatures hovered; plants, hung by Thomas' classmate Kennan, sprung from the basketball nets.  And the head table was a masterpiece:  each student had a bag of candy in front of his or her place setting.  Each student had his or her own name card written in cursive writing.  Nothing was left to chance.

Delicious scents wafted from the kitchen as the Grade 7 parents prepared our dinner (I have good memories of doing it last year).  Chatter filled the room as parents conversed with each other, many for the hundredth time, some for the first time.  The graduates took their places at the head table, looking like little adults in their tuxes and dresses.  Where did the past ten years go?  Didn't I just drop Thomas off at Kindergarten?

Mr. Hartholt, our principal, and our Grade 8 teacher (yes, he teaches, like all principals used to do -- he's the "principal teacher") asked us to take our seats.  By this time, Rob had also arrived from London after teaching his class.  The four of us found our name cards and took our seats beside the Werkman's and the Bray's.  Mrs. Murray said a beautiful grace.  The graduaties were the first to line up to be served a meal of:  chicken, roast beef, mashed potatoes, gravy, green beans and corn.  My son, as a teenage boy, is always hungry.  He sets to work devouring his dinner.

Then the adults join the queue.  Beautiful glass fish decorate the food table.  The Grade 7 parents serve us, pleasant smiles on their faces, eventhough some of them have been the kitchen cooking for the better part of the day.  Back at our table, we enjoy conversing with the other couples.  It is nice that Lance and Nicole were able to join us for the evening.  They have always been a part of his life and this is such a big occasion.  We also talk with the Bray's, who are a delighful couple, full of energy and life.  Mrs. Bray and I got to spend a couple of hours together yesterday taping bubbles to the wall.  What a small world!  I find out that Mr. Bray grew up in Toronto's East York and attended Danforth Tech, the same high school as my Dad.

An hour later, with everyone's tummy full, we sit back to listen to a play written and performed by Mr. Summerhays and the Grade 7 class.  Rob gets out our dinosaur-like video camera and starts filming.  The play is a roast of the Grade 8 students, all done in good fun.  Rob says that Mr. Summerhays has definitely pegged Thomas and Riley, who forget their gym clothes in one scene, and sit out while the other students participate in physed.  However, when they are gone, Thomas and Riley start filming one of their youtube videos, jumping around like madmen.  The Grade Seven's return to find Thomas and Riley quietly sitting as they were when they left them.

At 7:30 pm we all climb into our cars and head to our church for the ceremony.  I pull into the parking lot with Nicole (Lance drove with Rob) to see Jacqueline in her party dress, her hair in a French braid, sitting on the front lawn with her friends (their older siblings were also graduates).  We slowly made our way into the church, the foyer full of parents, siblings and grandparents.  We found my parents and in-laws already seated in a pew and we filed in beside them.  Jacqueline "adopted" my new camera as her own, as Thomas said.  She took about a hundred snapshots of the graduates.

The praise team took their place at the front and played a song, sounding like professionals.  Thomas was on electric guitar, another boy played drums, a couple of people played acoustic guitars and a few people sang.  Then one by one the graduates were handed their diplomas.  And one by one each graduate delivered his or her speech.  Everyone thanked God for all of the blessings he has given them, especially Brantford Christian School.  One girl thanked her anonymous sponsor who made it possible for her to attend the school.  The awards were distributed ex. music, academics, physed, citizenship.  Then Mr. Oudik, the Grade i's student teacher for the year, delivered a speech about the big picture, complete with a drawing of a green grass and trees and birds.  "Without God, we have nothing" was the message he gave the graduates.  Finally, the praise team played one last song and then the graduates filed out of the sanctuary, Jacqueline snapping pictures as fast as the graduates walked.

We mingled for a bit with the other guests.  Thomas and Riley changed into their regular clothes for the graduation party to be held at Josiah's house.  The graduates were excited about the party.  Rob pointed out how nice it was that the class had come together so well over the last couple of years.  There was the core group of students who had been together since Kindergarten.  However, there was a second group of students who had transferred to BCS in the last 3 or 4 years and they had blended in well.  The Grade 8's really enjoyed each other's company.

As dusk descended on Brantford and the last of the cars pulled out of the church parking lot, I thought of how blessed we have been at BCS.  They do not do anything halfheartedly.  The graduation was unforgettable.  Thank you, BCS!  And congratulations to our graduates! 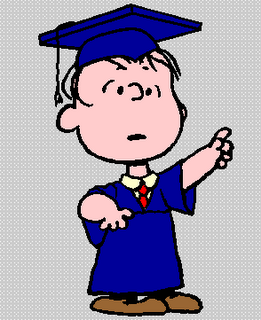