Federico Fellini's masterpiece La Dolce Vita, which won a Palme d'Or, was based on the life of Italian writer and poet Cesare Pavese.  In the 1930's and 1940's, he moved in anti-Fascist circles. Pavese's protagonists tended to be loners and their relationships tended to be superficial.  Pavese seemed to lack purpose in his life.  He spiralled into a depression and committed suicide in 1950. Italians took the death of the great author and poet very hard.

Fellini's protagonist in La Dolce Vita is also a writer.  He works as a gossip columnist, chronicling "the sweet life" ("la dolce vita) of fading aristocrats, second rate movie stars and aging playboys.  He attends high class parties and meets bikini clad women while his long suffering fiancee waits at home.  He is a "soulless man" with empty nights and lonely mornings.  His life lacks purpose and meaning.

Fellini catches old Rome on film in scenes at the baths of Caracalla, the Trevi Fountain, the Via Veneto and St. Peter's Square.  The story chronicles the seven deadly sins which take place over seven days on the seven hills of Rome.  One scene shows a statue of Christ being transported above the Roman aqueducts as someone yells:  "Look, it's Jesus!"

The Roman Catholic Church considered the scene to be sacreligious as it seemed like the Second Coming of Christ.  They banned the film in Spain until 1975.  The film, however, was well received at the Cannes Film Festival where it won the Palme d'Or. 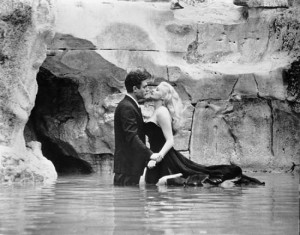