The Bells of St. Mary's

"The Bell's of St. Mary's" premiered in December of 1945 and starred Bing Crosby as Father O'Malley and Ingrid Bergman as Sister Benedict, two teachers trying to save their run-down parochial school from the wrecking ball.  Father O'Malley is new to the school and believes in liberal theories of teaching; Sister Benedict, on the other hand, has been instructing at the school for years and believes in firm discipline. One early scene involves the priest introducing himself to the sisters and as he speaks, he's puzzled at why everyone is laughing; a kitten has jumped into his hat sitting on the piano behind him.

Another funny scene involves Sister Benedict, in her habit, training student Eddie in the art of "pugilism", after he was tripped by the school bully.  Father Benedict helps a weaker student named Patsy with her essay, and after some prodding, discovers that her mother and father are estranged; the priest relocates Patsy's dad and brings the couple back together again.

The cutest scene of "The Bells of St. Mary's" occurs at Christmas time.  The Grade 1 class prepares a pageant in which they sing Happy Birthday to baby Jesus, played by the younger sibling of one of the students.  Rather than remaining in the manger, "toddler" Jesus keeps jumping out.

In the meantime, their neighbour, Mr. Bogardus, has built an office building next door and dreams of St. Mary's being torn down so he can build a parking lot.  However, Sister Benedict has been praying that Mr. Bogardus will donate the building to the parish to use as their new school.  The crotchety businessman goes to the doctor who diagnoses him with a bad heart.  What is the prescription?  Give with your heart and it will be full (and healthy). 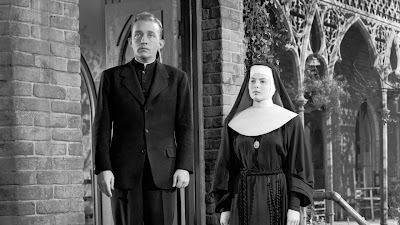